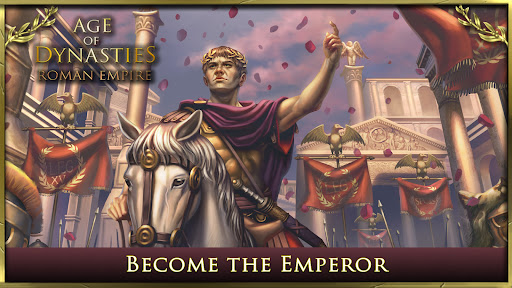 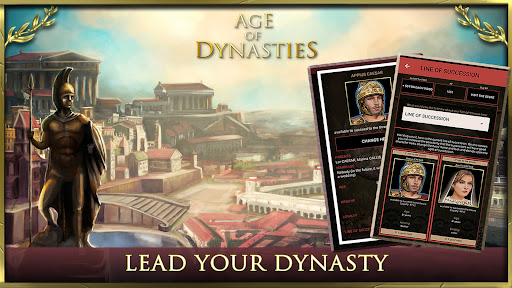 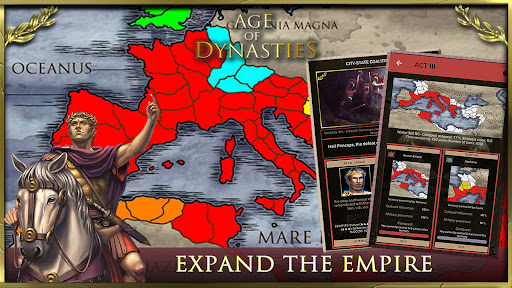 Hail Caesar! Your legions await you to conquer the world and lead Rome and your dynasty to eternal glory. A war is imminent.

Transform Rome from a small city-state in the heart of the Italian peninsula into the greatest civilization the world has ever seen. Lead your legions in epic battles against every kingdom and civilization that dares to wage war on the Roman Empire.

Upgrade the strongholds of your empire to defend yourself against the warriors of enemy civilizations who will besiege Rome in an attempt to bring down your kingdom.

Survive the challenges that, throughout history, have shaken the power of Rome by breaking up the empire: plots and betrayals, wars and barbarian invasions, riots, and coups d’état.

Caesar Augustus, rewrite the history of the Roman Empire and prevent its total fall.

Age of Dynasties: Roman Empire, features:
– rome strategy games: apply the best strategies to manage your empire by retracing, at each game turn, the most significant historical battles in the history of Rome in this innovative rome war game.
– dynasty and talented people: make your dynasty prosper under the command of your empire and prevent the establishment of the Roman Republic. Educate your heirs by strategically and tactically choosing talented people to train the future imperium to be a great conqueror and legendary emperor.
– city management: expand your cities by building imperial forums, Roman amphitheaters, aqueducts, pantheons dedicated to Roman gods, imperial villas, and strongholds.
– battle simulator: take command of your armies in ancient Europe and lead them into epic battles. Lead them with military strategy and tactics to subjugate enemy civilizations and conquer territory.
– invest in technologies and new ideas to strengthen the army and accelerate your conquests.
– game of conquest: lead the legions to take part in the Punic wars, the Spartacus revolt, the conquest of Gaul state, Sparta and the greek cities, the civil wars, and the total conquest of territory. Experience the rise and glory of Rome!
– Officers and Career: Enlist trusted centurions and generals to devise the strategy and command of your legions. Surround yourself with capable senators and officers to tactically administer the Roman states.
– political alliances and intrigues: propose royal marriages, alliances or trade agreements to the civilizations that control the territories bordering your empire or declare war on them and send your legions to conquer their territories. Face the mighty empire of Carthage, the tribes of the Gauls, the timeless Egyptian empire, and many other civilizations that were around during the Roman period.
– an innovative game of strategy and tactics in ancient Rome. Age of Dynasties blends four different game types perfectly: civilization wars and conquest games, turn-based strategy, management games, and RPGs.