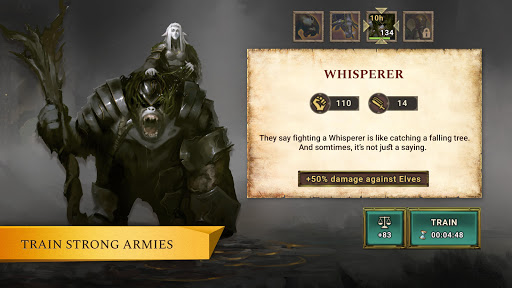 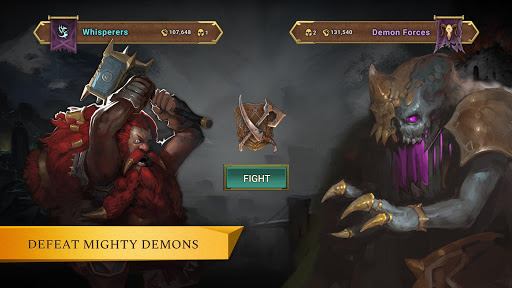 Discover Arkheim – Realms at War, the new fantasy MMO war game from the makers of the MMO strategy classic Travian. Build, raid, and battle in true cross-platform PVP – the depth of an RTS strategy game, with the accessibility of a mobile app.

Battle in an epic MMO fantasy RTS
Unite in a powerful kingdom, known as your realm, with players from all over the world. Fight for territorial conquest and valuable, arcane Orbs to expand your empire. Play as ruthless elves or inventive dwarves, and enter the war over an ancient prophecy. Discover the lands of Arkheim, its riches, and its secrets. Raise an army of fallen soldiers, harvest the power of the three moons, and ascend with your realm into Eternal Light.

Delve into Arkheim’s past
Arkheim, once a legendary empire, has been destroyed, with remnants of its kingdom floating in the sky. Now, its ancient relics have enthralled new explorers such as yourself, promising power and answers about the past. A prophecy foretells that once all three moons align into the Full Moon Trinity, those worthy will ascend into a kingdom of Eternal Light. To achieve this, you must gather mystical orbs that let you channel the energy of the moons, and transfer them into a colossal relic at the center of your realm: the Ark. The stronger your Ark, the more powerful your empire will become.

Create a prosperous future
You are an Ascendant, gifted with rare abilities and destined to turn your settlement into a flourishing city. In this RTS fantasy game, it’s up to you to build up your economy and train a mighty military, as your city will become the backbone of all your adventures on the battlefield and beyond. War is never far away. Descend into the depths of the dungeon below your town and battle its twisted demons, gaining ancient knowledge and powerful items in return.

Forge a mighty alliance
Band together with other Ascendants and create your own empire. Command mighty warlords and clash with other players in tactical round-based PVP battles. Combine your resources, defend each other, and strike as one. To prevail in Arkheim’s war-torn lands, you must devise more than one cunning strategy. Build and conquer towers in tactically relevant positions and gain control of valuable supplies. Raid other realms and steal their orbs to increase the power of your Ark. Once you dominate your area, you will be ready to ascend.

Ascend into Eternal Light
Once the Full Moon Trinity draws closer, ancient gates will activate. Conquer these gates to ascend to the next island in the sky, where the dangers and battles are greater, but so are your rewards. Only those ascending to the highest island will achieve the full power of the moons. Once all three moons have aligned, the mightiest realm will prove itself in a final challenge and ultimately reach Eternal Light. That power is now within your grasp.
Post= com.traviangames.arkheim