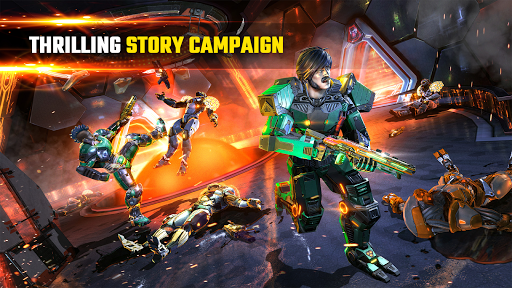 ★Award-winning Action First-person Shooter★
The universe is under attack and the last line of defense are the Shadowguns – legendary warriors, heroes and showmen. Fight against the alien invasion in the sci-fi world of Shadowgun Legends. Embrace your destiny and join the action in the epic story campaign, competitive PvP or cooperative multiplayer! Show the galaxy who is the ultimate shooter and become a Legend!

★Immersive Online Multiplayer★
Bring your friends to an intense Co-op available for every mission, dungeon and arena. Join a guild or make one of your own and play multiplayer games together! Feeling social? Visit Brno, our fallout town and meet new friends in the hub or in the bar! Apex of your adventures await!

★Thrilling Story Campaign★
Shoot aliens and fight for the survival of humankind in the epic story campaign in hundreds of missions spanning across 3 diverse planets. Every mission is playable in co-op and loaded with tons of action adventures and loot!

★PvP Multiplayer Battles★
Compete in PvP multiplayer game modes. Challenge friends to modern combat in a 1v1 duel or join a team in various tactical 4vs4 multiplayer games! Progress through the competitive leaderboards and reach the apex of Legends!

★Epic PvE Looter Shooter with Raids and Arenas★
Join forces with friends and shoot giant bosses for glory and legendary loot together. Fight and defeat the alien threat in War Games Arenas and Special Dungeons only on your mobiles! True Hardcore Shooting PvE FPS Experience!

★Top of the modern controller compatible games★
Choose between touch control or an enhanced virtual joystick! Our unique FPS controls system is approved by millions of players worldwide. Gamepads support included! Easy controls with auto-fire shooting allows you to focus solely on your survival.

★Become a Legend★
Progress through the Fame System that rewards your every action. The more you play, the more famous you are – and the more the world reacts to your actions! Fulfil your destiny and become legendary!

★Apex of the High-End Mobile Graphics★
We push the frontiers of what is possible on mobile devices! Shadowgun Legends is a breath-taking f2p online shooter with great graphics that blurs the lines between console and mobile gaming.

★Dedication to Quality★
At MADFINGER Games, we’ve always challenged ourselves to push the frontiers of mobile FPS online games to the console-quality. Millions of players have been blown away by our innovative approach, cutting edge graphics and precise FPS controls. We have been developing the best FPS shooting games since 2010. The authors of Dead Trigger, Dead Trigger 2, Unkilled and Shadowgun War Games, first-person action shooters downloaded by more than 200M players, we bring you this ultimate multiplayer free-to-play shooter!

There’s a storm coming! A BULLET STORM! Get ready for 6 new Epic and Legendary weapons (with much more to come!), new Bundles, Cosmetics, and Strongboxes! Fight for Fame and show the Torment who’s boss in 9 New Operation Missions! Fight against time in the upcoming brand new Adventure Module with an exclusive cosmetic reward! TONS of bug fixes and improvements!
Post= com.madfingergames.legends