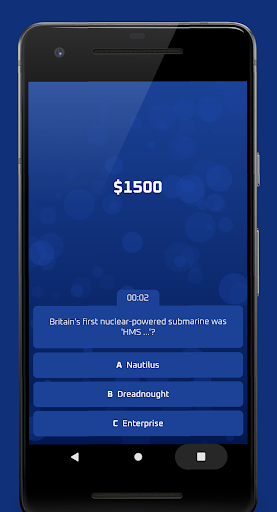 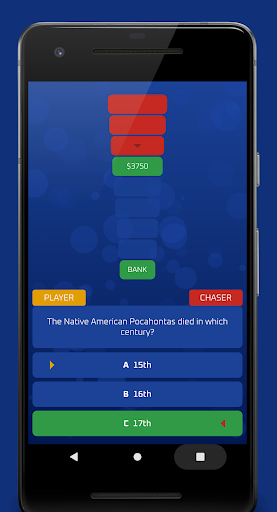 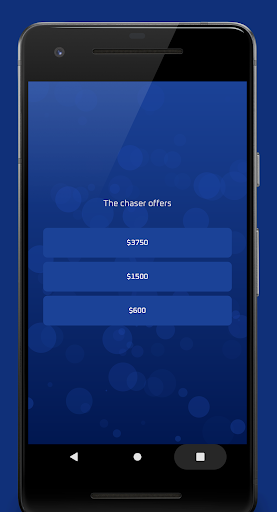 Description of The Chase - Quiz game

The goal of the first round is to answer as much questions as possible and accumulate as much money as possible. Player is given a set of questions and for each correct answer money budget is increased by certain amount. The first round lasts for 1 minute.

The goal of the second round is to complete the board before the chaser catches you. The board contains 7 steps. The player and the chaser are answering to the same questions, and for each correct answer, their position is moved by 1 step on the board.

Player starting position is determined at the beginning of the second round. A player is offered three starting positions, each position worth certain amount of money. The worth of positions depends on how many correct answers the player gave in the round 1. The chaser starts at the position 0. If player comes to the end of the board before chaser catches him, he is going to the “Final Chase”, otherwise the player is eliminated and the game is over.

In the third round, the player is answering a set of questions for 2 minutes and each correct answer is counted.

In the final round, the chaser is answering a set of questions for 2 minutes and each correct answer is counted. If chaser’s answer is not correct, the player has a chance to answer a question and increase his number of answered questions. If the chaser catch up number of questions the player gave in the previous round, the game is over and the player is eliminated, otherwise the player is going home with all money from the budget.
Editing profile picture
Rating and adding questions
Shake to report a bug
Design improvements